Home Samsung Samsung is working on Exynos 9610 chip for mid range devices.
There are rumours that Samsung is planning to launch a new mid-range chip to compete with SD 660.Samsung is working on the new Exynos 9610 which is similar to newly launched SD 660 and is made for mid range devices.Samsung teased the new Exynos 9 series earlier this year but the flagship Samsung Galaxy S8 came with Exynos 8895.Now we have the first chip in the 9 series with Exynos 9610. 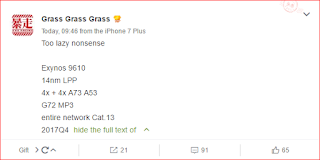 The Exynos 9610 will be manufactured on 14nm LPP process and integrates entire baseband.It is made up of four Cortex A73 cores and 8 Cortex A53 cores.Exynos 9610 will have G72MP3 GPU which looks like NVIDIA GPU. 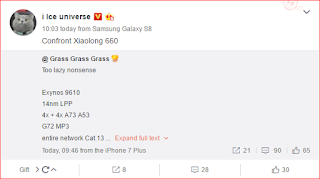 The Exynos 9610 is expected to launch Q4 of 2017.The first device to come with this chip will be from Meizu.Already Oppo has launched Oppo R11 with SD660 chip we have to wait and see how this chip performs with SD 660.