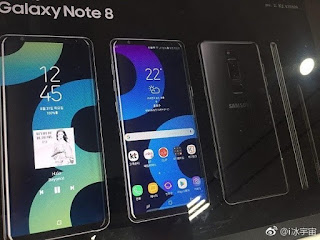 As per images, the front of the Samsung Galaxy Note 8 looks similar to S8 and S8+ with similar Infinity display having an aspect ratio of 18.5:9.The left side of the Note 8 has Volume rocker with Bixby key below it.At the right, there is Power on/off switch.Once again no Physical Home button this time.

The new leaks also show the rear of the device with Dual camera setup which is aligned vertically.Below the camera, there is a fingerprint scanner.There is Dual LED flash and Heart rate sensor too below the camera.The rear camera will be made by Samsung Opto-Electronics and will be of the 12MP sensor.

The  Samsung Galaxy Note 8  will be powered by SD836 in some markets like the US and other Asian markets will have the same Exynos chip.It will be having two variants one with 6GB RAM which is an International variant and other with 8GB RAM specific for China.All this will be fueled with 3300 mAh battery.It is expected to launch by end of August or September this year.