Home Uncategorized Samsung Galaxy J7 2017 is expected to have Snapdragon variant.
Earlier leaks we saw the Exynos variant of the Samsung Galaxy J 7 2017 now we have leaked from Geek Bench which shows a new model number SM–J727X and now it is powered by SD chip with Cortex A53 cores based on an ARMV8 architecture which is clocked at 2.2 GHz and has Adreno 506 GPU.From the Chip details, we get to know that it uses SD 626 chip inside which is last seen on C7 Pro and C5 Pro. 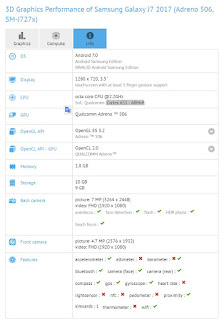 From the above images, we can see that the Samsung Galaxy J7 2017 is having a 5.5-inch 720p display this time compared to FHD display on Exynos variant.It has 2.5D curved glass on screen and has 16:9 aspect ratio.It is powered by Sd 626 with 2GB RAM and 16GB internal storage which can be expanded via microSD card.It has a 5MP front facing the camera with video recording support up to 1080p.It has either 12MP or 13MP rear camera with a LED flash.Surprisingly there is no NFC on this device.

As of now, we are not sure when it will be launching and there are no details about the pricing too. And the model shown above might be for some different markets. We have to wait for official announcement.