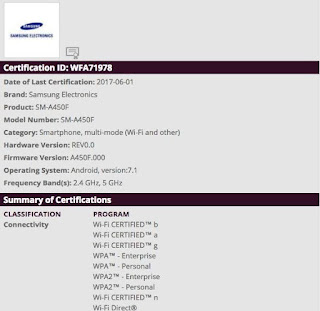 The leak images show us the model number A4 2017 as SM-A450F.As of now, there are no details about the design.But according to Weibo leak, it likely to have similar design what we saw on A3 2017. The rumoured smartphone might also be the Chinese J7 2017 edition.

Samsung Galaxy A4 2017 will come with fingerprint scanner mounted on front below the display similar to A3 2017.As per leaks, the A4 might come with 3000 mAh battery. It will also have USB Type-C port for charging the device with Samsung own fast charging capabilities. A4 will be having a 13MP rear camera with f/1.9 aperture and there are no details regarding the selfie camera.There are no details about the processor used but it might use Samsung own Exynos chipset with quad-core CPU.As it is entry level smartphone it might feature a 5-inch 1080p SuperAMOLED display.It will come with NFC too.It is having 3GB RAM and 32GB onboard storage with an expansion slot for the microSD card up to 256GB.It will run Android 7.1 out of the box with the latest version of Samsung Experience UI.