Home Google Google Pixel 2 render images leaked.
The upcoming smartphone from house of Google with the Pixel 2 is going to launch anytime in October or November with dates getting near we are getting series of leaks of the smartphone.Now we have got some images from China which shows us the bezel less design of the smartphone. 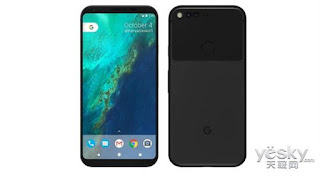 From the above images we can see the new bezel less display which looks stunning and the design at the back is similar to what we saw last year Google Pixel.Now Google Pixel is having Dual camera setup which is of 16MP as per leaks.It has 8MP selfie camera.

The Google Pixel 2 will be powered by SD 836 as we have already gave you the details that Qualcomm might launch the SD 836 for smartphones that are going to launch next half of this year.But as per leaks it is having SD 836 so take this news as pinch of salt we are not sure which chip the Google Pixel 2 will use.

As of now there are no more details about the RAM and storage variants so we have to wait for few more months for more leaks.