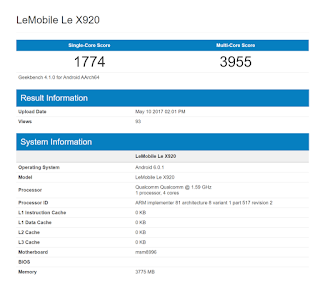 From the above image, we can see that Le X920 will be powered by SD 820 which is a prototype company is conducting internal testing.It has 4GB RAM and is running on Android 6.0.1 with EUI on top.The single core test score was 1774 points and for multi-core scores were 3955 points.
Last week we saw the Le Max 3 images leaked which had a similar design as per company earlier launched smartphones.We also came to know that it will run Android 6.0.1 with EUI 5.6 on top and 2.15 GHz SD 820 chipset.
From the model number X920, we can expect it to be called Le Max 3 as Le Max 2 had model number X820.The Le Max 3 might have 6.3-inch QHD display, 22.5 MP rear camera with Sony IMX318 sensor & 8MP front facing the camera.It might be priced $201 as per previous leaks.
Source
Share
Tweet
Share
Pin
0 Shares