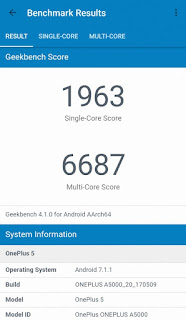 OnePlus 5 with model number A5000 is running Android 7.1.1 out of the box and has single core test score of 1963 points & 6687 in multi-core test.If we compare the score of Single core test with iPhone 7 Plus & Samsung Galaxy S8+ then OnePlus 5 is placed at the third position.But in the multi-core test, the OnePlus 5 shines and is at the first position by just 300 points more than Samsung Galaxy S8+. 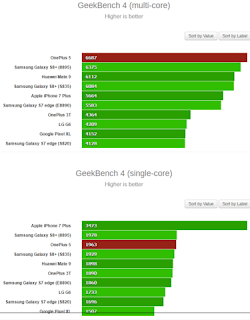 As it is still under pre-production phase and the score might vary after the final product launches. OnePlus 5 will come with 8GB RAM and will also have dual camera setup both at the front and back cameras.
Source
Share
Tweet
Share
Pin
0 Shares