Home Meizu Meizu 15 Plus retail box leaked, bezel-less display with an aspect ratio...
Meizu is celebrating 15 years of success in China and has decided to launch their 15-year anniversary edition with Meizu 15 Plus.The Meizu 15 Plus is scheduled to be launched in Spring next year. 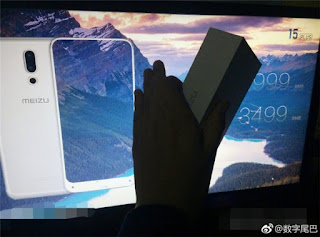 Now we have got the image of the retail box of the upcoming Meizu 15 Plus with the ad banner at the background show us the new Meizu 15 Plus.As per leaked images, we can see the Meizu 15 Plus has a similar design as the recently launched Xiaomi Mi Mix 2 with bezel-less 3 sided display at the front and below the display, we have the thick chin which has the selfie camera and some sensors and the dedicated Meizu m-button which act as a home key for navigation of apps which doubles up as a fingerprint scanner.

At the back, we have the Dual camera setup at the back which is aligned vertically with LED flash and Laser AF.The antenna bands are running at the bottom of the device.There is Meizu branding below the camera module.