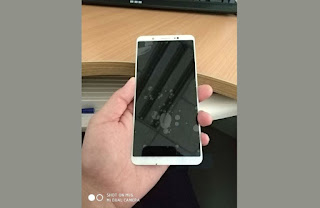 As per leaked images, we can see the Xiaomi Redmi Note 5 which white in color and is having a new design this time when compared with Redmi Note 4.From leaked images, we can see the Redmi Note 5 is having thin bezels with rounded corners and is rumored to be having FHD+ display with an aspect ratio of 18:9. There is nothing mentioned whether it is the Redmi Note 5 or any other Xiaomi smartphone, but when compared with previous leaks it matches the design and looks similar to earlier leaks.

The above images of the Xiaomi Redmi Note 5 have slightly different design with thinner bezels and the new position of selfie camera and sensors when compared with the photos leaked on TENAA website.Earlier the device was also listed on JD.com and OppoMart in China which confirms that the Xioami Redmi Note 5 will be launching soon.