Home Samsung Samsung Exynos 7885 SoC to come with support for Bluetooth 5.0
Facebook
Twitter
Pinterest
WhatsApp
Samsung latest mid-range chipset with Exynos 7885 has now been spotted on Bluetooth SIG Certification. Earlier leaks claimed that upcoming Samsung Galaxy A5 (2018) and A7 (2018) will be powered by Exynos 7885 which is expected to be launched early next year. 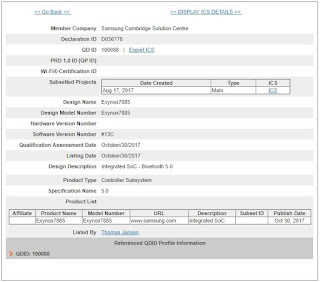 As per Bluetooth SIG listing, the certificate is acquired by Samsung Cambridge Solution Center, which focuses mainly on Wireless technology.There is no mention of the smartphone model number in the application and only the Exynos 7885 Chipset is mentioned. As per earlier leaks, the Exynos 7885 chip comes with two powerful ARM Cortex-A73 cores clocked at 2.1GHz speed and four low power Cortex-A53 cores.It is coupled with ARM Mali-G71 GPU.

Samsung launched its first smartphone with Bluetooth 5.0 with Samsung Galaxy S8 and now we can expect the latest Bluetooth iteration to follow the trend on mid-range segments.Earlier leaks also claimed that the upcoming Samsung Galaxy A5 (2018) and A7 (2018) will have Infinity display with lower resolution and also comes with IP68 certification.There are also rumours of Samsung adding a dedicated Bixby key to launch the AI similar to Samsung Galaxy Note 8.