Home Samsung Samsung Galaxy S9 to sport front-facing fingerprint scanner
Facebook
Twitter
Pinterest
WhatsApp
After series of leaks and rumours of the upcoming Samsung Galaxy S9, we finally have some new leaks.Samsung has recently filed a patent where it has been shown that the device is featuring front-facing fingerprint scanner button below the display. 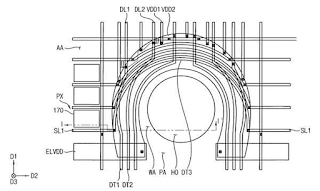 Samsung was trying its best to include the under display fingerprint tech which was rumoured to be featured on both Samsung Galaxy S8 and Note 8 which didn’t happen due to screen issues which forced Samsung to include the fingerprint scanner at the rear of the device.Now Samsung has filed a new patent which might bring back the fingerprint scanner below the display.The patent is too old which was filed in 2016 and there are rumours of including that feature in the upcoming Samsung Galaxy S9.

As per the patent, there will be a small notch or hole which will feature the fingerprint scanner just below the display as we earlier seen on Essential PH-1 which too ha a hole above the display which was for selfie camera.So we have to see how accurately will it work in real life scenario. So let’s wait for the Samsung upcoming Samsung Galaxy S9 which will not launch anytime sooner than March 2018.