Home OnePlus New leaks show the rear view of the rumored OnePlus 5T
Earlier we had series of leaks showing us the front view with nearly bezel-less display and now we have some new images popped up which show us the rear of the device. 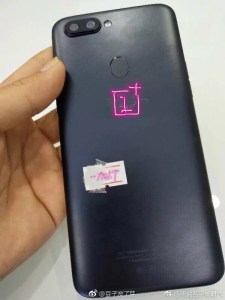 We can expect the same materials to be used on OnePlus 5T as OnePlus 5 and is made out of metal.Earlier leaks showed us the front side of the OnePlus 5T which looks similar to Oppo R11s with thin bezels and rounded corners.As per earlier leaks, the OnePlus 5T is rumoured to be powered by same SD835 chip coupled with 6GB/8GB RAM with 64GB/128GB storage options.The only change will be in display resolution, now OnePlus 5T will sport 6 inches FHD+ display having an aspect ratio of 18:9.It is expected to ship with Android 8.0 out of the box with the latest version of Oxygen OS on top.