Home Xiaomi Xiaomi upcoming Mi 7 to come with Qi Wireless Charging support
After Apple launching its iPhone 8, iPhone 8 Plus and iPhone X support for Qi Wireless charging, now we have the Xiaomi to get the same feature on the next flagship with Xiaomi Mi 7. 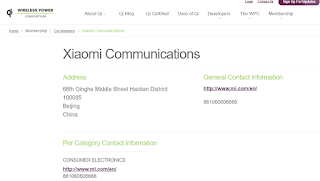 Recently Xiaomi has joined WPC aka Qi Standards.Qi Wireless charging is a well-known brand which has been seen on earlier devices from Nokia, Samsung and LG and recently launched Apple iPhones.Now the Xiaomi brand is been listed on the Qi standards website and Xiaomi has not yet announced about they have joined WPC.So with Xiaomi brand been listed on WPC aka Qi standards website, we can expect that next Mi 7 will come with Qi Wireless charging support.

As per earlier reports, the Xiaomi Mi 7 will be launched in April next year. Earlier devices like Mi 5 and Mi6 too had Glass back and could have introduced this feature but Xiaomi didn’t do that so it is never too late to introduce as Apple to recently introduce the Wireless charging feature.

Qi Wireless charging charges the device slower than the traditional wired charger even if it comes with Fast wireless charging capability what we saw on Samsung smartphones in the past.With Apple joining the Qi standard we can expect a lot of other brands too soon join WPC and launch some more devices with Wireless charging.