Home Xiaomi Xiaomi rumored Android one smartphone Mi A1 spotted on GeekBench
Xiaomi is all in news with their very first Android One device with Xiaomi Mi A1. After back to back details leaks from the official website, now we have finally spotted the device on popular benchmarks with GeekBench.

As per GeekBench listing, the device is named as Xiaomi Mi A1 and is powered by Qualcomm Snapdragon MSM8953 chip clocked at 2.0 GHz which is none other than SD625 chip coupled with 4GB RAM. 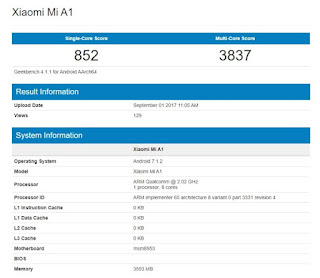 As per earlier leaks, Xiaomi Mi A1 will have 32GB onboard storage and there is no info whether the device will have support for microSD card or no, but earlier Android One devices had support for microSD card so we might expect even Mi A1 to have support for microSD card.Xiaomi Mi A1 is rumored to have 5.5 inches FHD display.It will also feature Dual camera set up at the back with two 12MP camera sensors.It will be a Dual SIM device and will be having Stock Android OS without any customisation on top.There are also rumors of Google providing unlimited storage for Google Photos.All this is fueled with 3080 mAh battery.As of now, there are no details regarding the pricing and availability.