Home Samsung Samsung Galaxy C8 will launch on Sept 7, commercial ad leaked.
Samsung upcoming mid-range smartphone which was rumored to be called Samsung Galaxy C7 2017 earlier which is now called as Samsung Galaxy C8 as per earlier leaks.After series of leaks which showed us the device with some of the key specs, now we have an official launch date for the device leaked. 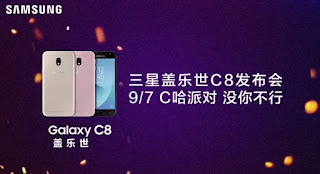 As per leaked ad images, the next Samsung Dual camera setup device with Samsung Galaxy C8 is all set to launch on Sept 7 in China. The Ad image was leaked on popular Chinese social media website Weibo yesterday.As per the leaked images, the device will come in three color option with Pink, Black, and Gold. 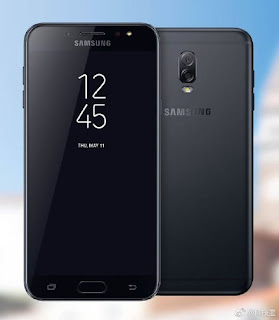 Earlier the device was spotted on TENAA with model number C7100 which is now called Samsung Galaxy C8. As per TENAA, the device will come with 5.5 inches FHD Super AMOLED display.It will be powered by unknown chip clocked at 2.39 GHz coupled with 3GB/4GB RAM and 32GB/64GB onboard storage.

Samsung Galaxy C8 has Dual camera setup at the back which is aligned vertically.It comes with a 12MP or 13MP primary camera with the 5MP secondary rear camera with Dual Tone Dual LED Flash.There is 16MP selfie camera for selfie lovers.

Earlier leaks we even got to know some more C series device with C10 and C10 Pro which were rumored to have Dual camera setup and were scheduled to launch before Samsung Galaxy Note 8 which didn’t happen. So we might see some more C-series smartphone in coming weeks after the launch of Samsung Galaxy C8.As of now, there are no details regarding the Indian launch and availability.