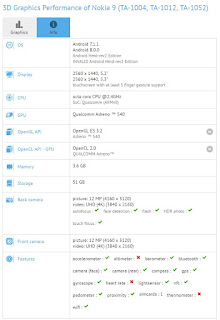 As per listing on GFX Benchmarks, there are three model numbers for the Nokia 9 with TA-1004, TA-1012 and TA-1052.The first two model numbers with TA-1004 and TA-1012 are for the recently launched Nokia 8.So probably the latest GFX Benchmarks is showing wrong info instead Nokia might be testing the latest version of Android with Android O as per the Benchmarks results.The only new model number is TA-1052 which might be the Nokia 9.As per GFX, the Nokia 9 has two display sizes with 5.2 inches and 5.3 inches both having same resolution with 2560 x 1440p.

As per rumors, the Nokia 9 is powered by SD835 chip coupled with 6GB/8GB RAM and 128GB onboard storage.But as per GFX listing, the Nokia 9 has 4GB RAM and 64GB so again we have doubt whether it is the same Nokia 8 or all new Nokia 9.Apart from that even the Nokia 9 has the 12MP rear camera and 12MP selfie camera.Both the cameras can record video up to 4K.The device is running on Android Oreo and Android 7.1.1.

We have to wait for few more weeks to get some more info about the upcoming Nokia 9.