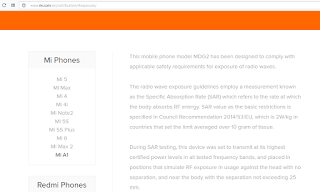 Xiaomi has taken down the Xiaomi A1 from their website now which was spotted last week.As per leaks, Xiaomi A1 will be a mid-range device made by Xiaomi and Google.It will sport 5.5 inches FHD display.Xiaomi A1 will be powered by SD625 chip coupled with 4GB RAM and 32GB onboard storage.It will also feature the 12MP Dual camera setup at the back and 8MP front-facing camera.The Xiaomi A1 will have all metal body.All this is fueled with 3080 mAh battery.

Xiaomi A1 will be the first Xiaomi device will come without  MIUI 9 instead will have stock Android UI as it will be made by both Xiaomi and Google.We can take this rumour with pinch of salt as there is no confirmation from both Xiaomi and Google but we the Xiaomi A1 was listed on Xiaomi website recently so we might expect that Xiaomi might launch the device anytime soon.