Home Mi Xiaomi Mi Mix 2 will launch on Sept 12.
Xiaomi concept smartphone the Mi Mix which was launched last year made huge success and with that, we even got series of leaks and rumours that the successor Mi Mix 2. Now we have some more rumours about the Mi Mix 2 which is now going to be launched on Sept 12 in China. 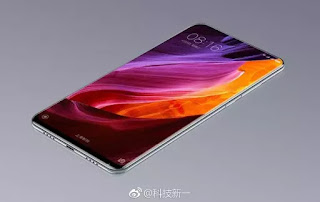 As per previous leaks, the Xiaomi Mi Mix 2 is codenamed as Chiron.It will be completely built out of metal and ceramic similar to last year launched Mi Mix.It is rumoured to sport 6.4 inches display probably FHD.It will be powered by SD835 chip and come in two variants as per above info.The rear camera is of 12MP with Sony IMX386 sensor and 5MP with OmniVision OV5675 sensor as a front-facing camera.It s expected to have 93% screen to body ratio.The device will run on Android 7.1.1 with the latest version of MIUI on top.

The Xiaomi Mi Mix was launched in Oct 2016 and now the successor is launching earlier than expected probably due to upcoming Apple iPhone launch which is too scheduled to arrive by end of Sept.We have to wait for few more weeks for some more details regarding the device.