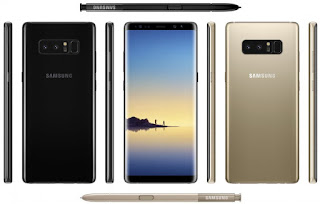 Samsung recently released the teaser video which highlights the upcoming Samsung Galaxy Note 8.The clip also confirms the unpack event date and venue at the end of the video.Samsung has also mentioned hashtag as #DoWhatYouCant as the tag line for the next flagship.They have also teased that the next device will be having bigger display size in the video.

The next leak is for the Dual camera setup of the upcoming Samsung Galaxy Note 8. Earlier we saw numerous leaks about the Dual camera setup and now we have some more leaks for the same. As per latest reports from South Korea, the rear Dual camera will have a 12MP main camera with Dual-Pixel AF one found on S7 and S8 and 13MP telephoto camera with 2x fixed optical zoom.Both the cameras will have support for OIS.The rear dual camera will provide blur effects and better low light images when compared to earlier launched devices.

Apart from that we also got the support page of the upcoming Samsung Galaxy Note 8 leaked which shows that Samsung Galaxy Note 8 will now support Dual SIM hybrid slot even for European markets.According to the Samsung Austrian support page, the device listed as SM-N950F/DS which is the same model number which was spotted on BIS in India, the DS means that it is Dual SIM.The model number SM-N950F will be powered by  Exynos 8895 chip so finally, Samsung will be launching Exynos version in European markets as per leaks. But for US markets it will still come with Single SIM and will be powered by SD835 chip.

As per the employee of BestBuy in the US stated that the Samsung Galaxy Note 8 will go on sale starting from Aug 24 who has already got confirmation from both Verizon and Samsung.We are still not sure about the above leaks it might probably go on pre-orders.As of now, there are no details regarding the Indian launch.

Samsung Galaxy Note 8 will be launched on August 23 in New York.