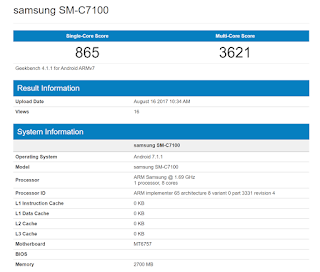 As per earlier leaks, Samsung Galaxy C7 2017  will sport 5.5 inches FHD display. It will be powered by SD600 series chip coupled with 4GB RAM and 64GB on board storage.It will come with 13+5 MP dual camera setup at the back and 16MP front-facing camera.All this will be fueled by 2850 mAh battery.

Samsung Galaxy C7 2017  has already passed through TENAA in China and also listed on Bluetooth SIG certification website which revealed more than one variant of the device will be sold in other countries which suggest us that the device will not be exclusive to China anymore.As of now, there is no details regarding pricing and availability. We have to wait for official announcement which might happen anytime soon.