Home LG Press renders of upcoming LG V30 leaked.
Facebook
Twitter
Pinterest
WhatsApp
LG is all set to launch its next flagship with LG V30 which is the successor to last year launched LG V20.After back to back leaks from design renders to specs, now we have some press renders of the LG V30 leaked recently. 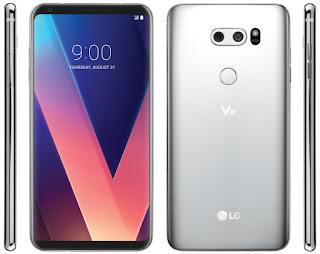 Earlier we had live images leaked of the upcoming LG V30 by HITRECORD user community which LG had partnered for promoting LG V30, where we saw some users were taking pictures and recording videos from LG V30 which was not that clear images.Now we some new leaks of the upcoming LG V30 which shows the clear image of the device from all angles.The image was leaked by Evan Blass on twitter yesterday.As per Evan Blass, the above-leaked images are press renders of the LG V30 but we aren’t sure about that.

From the leaked images, we can see the LG V30 which has similar Full Vision Display one found on LG G6 with an aspect ratio of 18:9.The design looks similar to LG G6 and is slightly taller.There is no secondary display this time when compared to last year LG V20 which had a secondary display on top of the display.As per rumours, LG has replaced the secondary display with floating bar feature which works similar kind of functionality.
LG V30 is completely built out of metal and looks similar to earlier leaks.The back panel can be removed and also comes with a removable battery which was even present on earlier devices with LG V10 and LG V20.As of now, there is no specs and dimension of the device been mention but from images, we can see it has a very sleek design.
At the back, there is rear dual camera setup with LED flash on the right.There is rear mounted fingerprint scanner below the camera module.We can even see the rounded edge on top and bottom of the display which looks similar to LG G6.The LG V30 is all set to launch on Aug 31 in IFA Berlin.
Share
Tweet
Share
Pin
0 Shares