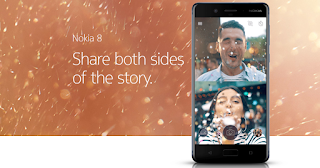 Nokia finally launches the most awaited flagship device with Nokia 8. Many Nokia fans were waiting HMD Global partnered Nokia to launch its first Android flagship and here it is. 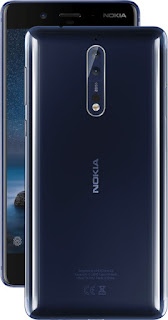 Nokia 8 is completely made out of metal unibody with  Aluminium 6000 series with polished mirror finish.It is just 7.9 mm thick.Nokia 8 sports a 5.3 inches IPS QHD display with a resolution of 2560 x 1440p.The display is protected by 2.5D curved Corning Gorilla Glass 5.Nokia 8 will be available in Polish Blue, Tempered Blue and Polished Copper colour options.

Nokia 8 is powered by SD835 chip coupled with 4GB RAM and 64GB onboard storage which can be expanded via microSD card up to 256GB.Nokia 8 comes with Dual camera setup aligned vertically at the back with 13MP + 13MP combination with an aperture of f/2.0, 1.12-micron pixel, PDAF and Dual tone LED flash.One camera is having Colour sensor with OIS and another camera is having a monochrome sensor.The selfie camera is of 13MP with 1.12-micron pixels and f/2.0 aperture with PDAF and displays flash similar to what we found on iPhone 7.Nokia 8 has a special feature called Dual Sight mode in camera which splits the front and rear camera while doing live stream on Facebook and YouTube. 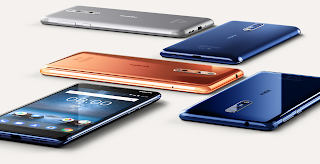 Nokia 8 has also added 360 degrees spatial surround audio recording which will capture the sound with a quality match to the 4K video recording. 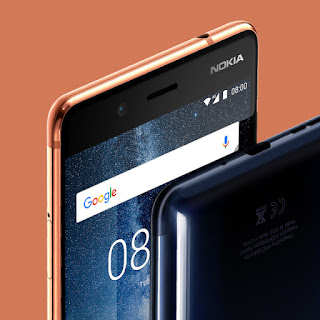 The connectivity options include Dual SIM (Hybrid Slot) 4G LTE with VoLTE support, Dual band Wifi, NFC, BT 5.0, GPS, GLONASS, 3.5 mm audio jack on top and USB Type -C port at the bottom of the device. On the right, we can find the Power key and Volume rocker above it. On the left of the device, there is SIM card slot with microSD card support.Nokia 8 has also got the IP54 rating which makes it Splashproof.All this is fueled with 3090 mAh battery and is running on Android 7.1.1 without any customisation. 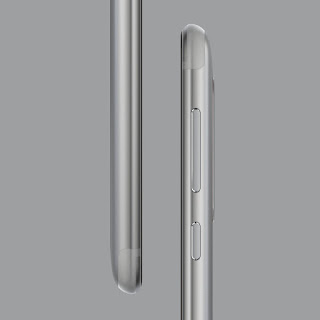 Nokia 8 will go on sale starting from Sept. Nokia 8 is priced at 600 euros which translate to  Rs.45,500/- in India, as it is flagship device from Nokia and is giving tough competition to Samsung Galaxy S8 duo and HTC U11.As of now, there are no details about the Indian launch date and pricing info of Nokia 8.