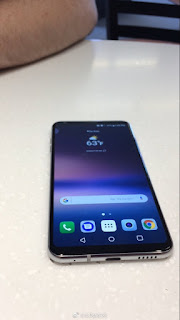 From the leaked images, we can see the all new LG V30 which is now having bezel-less Full Vision Display with rounded edges.There are no physical keys anymore instead they are replaced by on-screen navigation keys.From the front, the LG V30 look similar to previously launched LG G6.There is front facing the camera with earpiece and sensors on top of the display.

Att the bottom of the device we can see the speaker mesh with USB Type-C port and the Microphone hole with the antenna band.There is no longer secondary display what we saw on earlier LG V series devices with LG V10 and LG V20.But LG has added a new feature called the floating bar which is located on the top-left corner of the device.

As per earlier leaks, LG V30 will sport Dual rear cameras and will also have support for Quad DAC in all regions.LG V30 will also come with the larger display when compared with LG V20. It will be running on Android 7.1.1 and might get Android O update in the future.