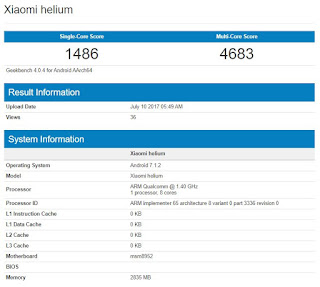 As per leaks from GeekBench, Xiaomi has codenamed it has Helium. It is powered by SD 617 chip coupled with 3GB RAM and runs Android 7.1.2 out of the box. Apart from this, there are no further details about the device.

From the specs leaked, we can expect it to be a mid-range device.Earlier with Mi Max 2 too Xiaomi codenamed it as Xiaomi Helium and Xiaomi Hydrogen which was depending upon storage model. The one with Helium had 64GB and 128GBonboard storage and one with 32GB onboard storage as Hydrogen.With that, we can expect the upcoming Xiaomi Helium will have 64GB and 128GB storage options.

The Xiaomi Helium scored 1486 on Single-Core Score and 4683 on multi-core test. As of now, there is no design leaks and other specs we need to wait longer for some more details.