As per Geekbench leaks, we can see the Xiaomi Mi 7 as the name of the model and surprisingly the device is downgraded with 2016 chip SD820.The Mi 6 was launched with SD835 and now Mi 7 is been powered by an outdated SD820 chip which is shocking and might be the device might be a dummy device for testing.Apart from that the Mi 7 is having 5.1 inches FHD display coupled with 3GB RAM and 64GB onboard storage. 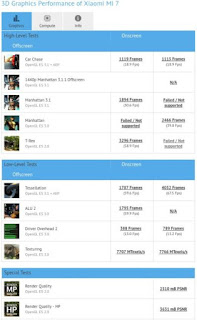 As per listing Mi 7 has 16 MP camera at the back and 5 MP front facing camera.There are lots of sensors included with the Mi 7.The device is running Android 7.0 with latest MIUI 9 on top.From the above screenshots, we can even see that the Mi 7 is bee compared with 2016 flagship like Samsung Galaxy S7 and HTC 10 which are having low score than the Mi 7.

We can take this news with a pinch of salt, so we need to wait a bit longer for some more leaks as the device will be only released in May 2018.