Home Sony Sony’s upcoming Xperia flagship got leaked.
Sony is all in news with its most rumoured Full Active display smartphone which is expected to launch in IFA Berlin.Now we have the devices which are expected to launch at the event with model number G8341 and G8441. As per Polish retailer, Komp.Tech has got two devices but it doesn’t have more information about the same. 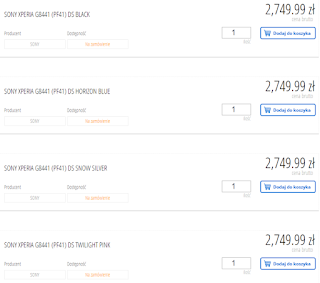 The G8341 will be the flagship device from Sony and will cost 749 Euros (Rs.55,000/-) and other will be the Compact version of the flagship which will cost 649 Euros (Rs.48,000/-) as per the Polish retailer.As per the leaked details, the model number G8341 has been mentioned as Flagship and will be available in Black, Moonlite Blue, Venus Pink and Warm Silver. The other model G8441 is mentioned as Compact Flagship will be available in Black, Horizon Blue, Snow Silver and Twilight Pink.Sony is launching two devices and with a variety of colour options this time. There are no details about the specs and design. 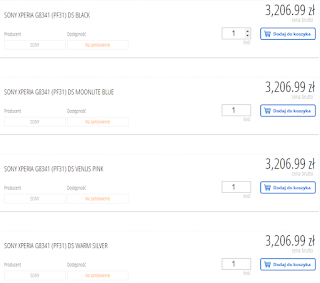 Sony has already confirmed that it is going to launch some devices in IFA Berlin on August 31, 2017.Sony actually launches their upcoming devices in MWC and IFA Berlin and it is following the same this time too with two new devices for next half of 2017. As of now, there are no details what will be the two devices called we might expect it to be rumoured XZ1 and XZ1 compact.We have to wait for few more weeks for Sony to officially announce their latest flagship.