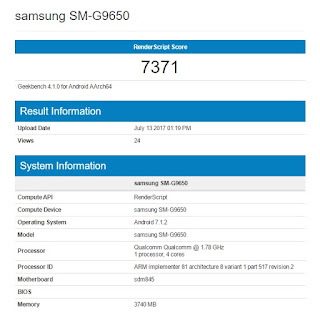 From the above-leaked details, we can see the Samsung device with model number Samsung SM-G9650 which is been spotted on popular benchmarking site the GeekBench this week.The upcoming Samsung SM-G9650 is been powered with upcoming SD 845 chip which is clocked at 1.78 GHz.The SD 845 chip is built on the 7nm process by TSMC and not by Samsung this time, as Samsung is still not able to implement the 7nm process and might launch Exynos chip with the 8nm process.
Samsung SM-G9650 is coupled with 4GB RAM which is low when compared to 6GB RAM which is rumoured to be the default RAM on upcoming  Samsung Galaxy Note 8.The device is running Android 7.1.2 out of the box.The Samsung SM-G9650 got rendered script score of 7371 points which low when compared with the Samsung Galaxy S8 with 9000 points.
As of now, there are no more details regarding the design, display and camera details. We need to wait longer as the Samsung Galaxy S9 will not launch anytime earlier than March 2019.
Source
Share
Tweet
Share
Pin
0 Shares