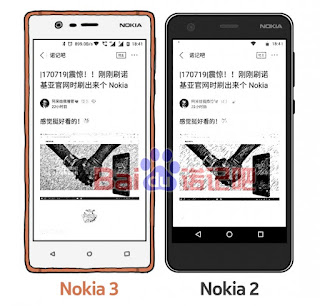 According to the above-leaked images from China, we can see the rough drawing of  Nokia 3 been compared with Nokia 2.From the images we can see only the front part of the device. The Nokia 2 is not having a fingerprint scanner as per the images.We can see the on-screen navigation button with the Nokia 2, which is new and none of the announced handsets from Nokia has software navigation keys.Nokia 2 is expected to have 5 inches display similar to Nokia 3.The design of the Nokia 2 looks similar to Nokia Lumia 620 as per leakster.The Nokia 2 will be powered by SD212 chip.

As of now, there are no more details and we can take this news as a pinch of salt as this might be just a rumour.