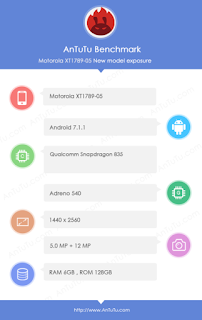 As per the above screenshot, we can see the model name as Motorola XT1789-05 which might be the upcoming Moto Z2 Force.As per the leaks, Moto Z2 Force is having a 2K display with a resolution of 2560 x 1440p. It is powered by SD835  coupled with 6GB RAM and 128GB onboard storage.The Moto Z2 Force is having a 12MP rear camera and 5MP front-facing camera.There is no mention of Dual camera setup but as per previous leaks, it will come with Dual Camera setup with Dual Tone LED flash.It will be running Android 7.1.1 out of the box.

Moto Z2 Force scored 1,68,000 points on Antutu Benchmarks which is as expected for a device with SD835 chip inside.There are no details regarding the battery capacity. The device might be unveiled in #helloMotoWorld event held in New York on July 25.We have to wait for few more days to get the official details for the Moto lineup of devices.