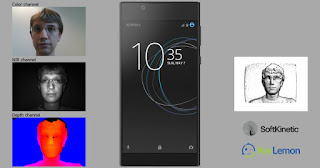 As per reports, there will be a 3D sensor which is integrated with a mobile phone which will provide depth, consequently will be able to accurately scan the person’s face.The sensor will be attached to the front facing camera of the device for cost cutting, as of now, here is no information about how effectively it will work.SoftKinect is currently working on the prototype of the next Xperia smartphone from Sony.

SoftKinect didn’t develop this tech from scratch instead it uses a Face Identification software made by KeyLemon, a Martigny, Switzerland-based company with almost a decade of experience in this industry segment.SoftKinect currently handling the hardware and implementation of recognition solution to its Sony Xperia devices, expecting it to develop the first True 3D Facial Recognition Tech.
We have already seen this feature in most Samsung smartphone like Note 7 and S8, but it doesn’t use this tech and it is not as secure as the True 3D Facial Recognition Tech and can be easily hacked by showing the photo of the owner.

This upcoming feature is still under testing and developing phase so we have to wait still longer to experience it in a smartphone. hope Sony launches this tech soon in their next set of Xperia device.