Home Uncategorized Samsung Galaxy Note 8 facing display brightness issue and screen guard leaked.
Samsung Galaxy Note 8 the next big thing from Samsung is all set to launch in IFA, Berlin this year. With back to back no stop rumours and leaks, we have got some more details about the Note 8.Samsung is implementing the fingerprint scanner in the display and we had some news it is facing difficulty, but we didn’t know the reason behind it. Now some Industry experts told that Samsung is unable to add an optical fingerprint scanner in the display, as it is facing display brightness issues.

The area where the fingerprint reader is located is too brighter which is still unclear why, but we can see the images above for the same.Even we had a rumour that Samsung will not implement this tech in the upcoming Note 8 due to some issues. So we have to wait for S9 for the on-screen fingerprint tech.As we saw many other Chinese manufacturers are already working on the same and Vivo has already achieved it from the previously leaked video but nothing is confirmed as of now.So we hope Samsung fix the issue soon and launch Note 8 with this awesome feature. 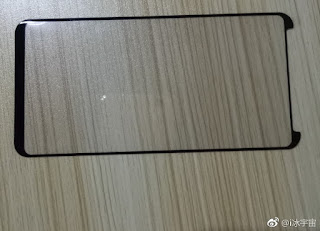 With that, we have one more leaked image of the Note 8 screen protector.Earlier we saw a video of the display of Note 8 which was uploaded on Chinese Social Media Weibo which had very thin bezels, thinner than an S8 duo.Now we have got some more images of the screen protector pf the Note 8.

The Screen Protector for Note 8 looks glossy black variety, similar to what we found in the Black colour of the Note 8.So we can expect the Note 8 will have Midnight Black edition similar to S8 & S8+.

Samsung Galaxy Note 8 will be powered by SD 835 or SD 836 in the US and Exynos chip for other markets.As per insider report, it will come with base 6GB RAM and 64GB storage model and might have 8GB RAM and 128GB storage for Chinese markets.