Home Uncategorized Qualcomm Quick Charge 4+ launched with 15% faster charging times.
Qualcomm announces the QC 4+ the successor to QC 4 which was launched in 2016 with SD 835.The QC 4+ is also based on the SD 835 chip and is more efficient than the QC 4.0. 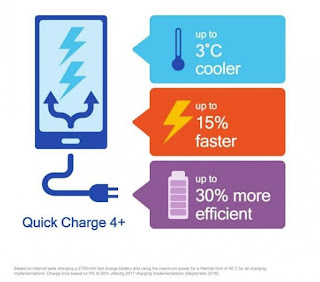 The device which are launched with QC 4 can be upgrade with QC 4+ if manufacturers includes the three enhancements.The QC 4+ is similar to the earlier version but Qualcomm says it is more powerful compared to earlier version.There is an special thermal balancing feature which helps the device and chip temperature to keep down.The last enhancement is Advanced Safety Feature that prevent phone and connector from overheating and short circuit damages.

As per Qualcomm QC 4+ will charge devices 15% faster and 30% more efficient.Charging would also be up to 3 degrees Celsius cooler.The QC4+ is not software upgrade it is an hardware upgrade. The only device with this feature is Nubia Z17.