Home Samsung Now the rear side of the Samsung Galaxy Note 8 leaked.
As per earlier leaks, we have got the front panel leaked by a Chinese leakster which was leaked on Twitter, now we have one more leak from China which shows us the back side of the Note 8. 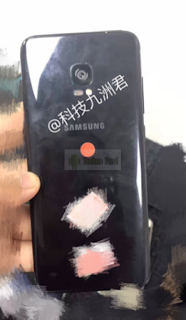 From the above image we can have a look at the single camera below it we have heart rate sensor and LED flash which is now moved from the side of the camera to below the camera module.Please note that there is no fingerprint scanner now at the back of the device, probably it might come built within the display as per some rumours.As per many leaks Note 8 will come with Dual camera setup but as per above image suggest it is having only single camera lens.Probably it might be Note 8 or maybe some other Samsung smartphone.From the backside design language, we can guess it is Note 8 but probably a prototype so we have to wait for the final product to get leaked.From the design at the back looks similar to Samsung Galaxy S8 which is good.

Samsung Galaxy Note will be unpacked anytime in August or September this year or even might launch in IFA Berlin.