Home Uncategorized The upcoming Apple iPhone 8 will have very thin bezel like S8...
Apple doesn’t want to lose their market shares and is working hard to gain more popularity with upcoming iPhone 8. As we know Apple is celebrating the 10th anniversary and we also had leaks claiming will be launching iPhone 8 with iPhone 7S & 7S Plus now we have got the schematic diagram of the iPhone 8 which has a nearly bezel-less display similar to Mi Mix, Samsung Galaxy S8 & S8+.We also know that Apple has ordered OLED panels for upcoming iPhone and also there are leaks claiming will be having Touch ID sensor on the display. 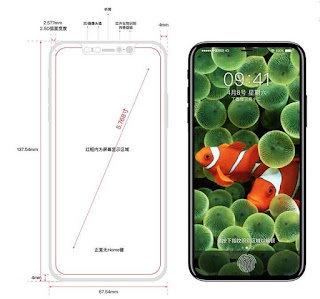 As per MacRumors, iPhone 8 Schematic renders were leaked by KK Leaks which shows the iPhone 8 is having very thin bezels which are 137.54 mm tall & 67.54 mm wide.It is likely to come with a larger 5.8-inch display.The screen will cover only 4 mm thick bezels & might come with 2.5D curved glass.The images showing only the earpiece, but there is no front camera on the leaked image.There is rumour&it will have 3D sensor & ambient light sensor but are not visible in the leaked images. 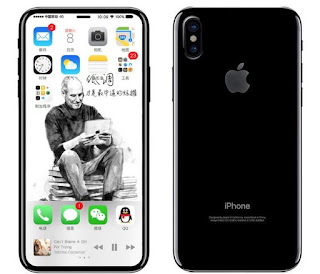 Even there is no physical Home button at the front.So it might come with Touch ID built into the display.As of now there are testing the Touch ID if it didn’t work properly there might be design changes in the future.

At the back of the iPhone, we have vertically aligned Dual Camera setup as per earlier leaks.The design at the back is similar as shown by Slashleaks. But the LED flash is now placed in between the camera lens.Apart from that Power button is on the right & Volume rocker, the Silent key at the left.

We have to wait until September for the official announcement of the upcoming iPhone 8.