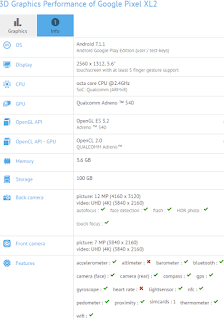 As per GFX Benchmarks the Google Pixel XL 2 will be powered by SD 835 clocked at 2.35 GHz.It is coupled with 4GB RAM and 128GB internal storage.Google Pixel will be having 5.6 inch QHD with resolution of 2560 x 1312 display compared to original Pixel XL had 5.7 inch display.The Google Pixel XL 2 might have similar aspect ratio of 18.5:9 or 18:9 what we found on Samsung Galaxy S8 & S8+ and might have bezel less display.

As per camera it will be of 12MP at the back and 8MP at the front.Interesting to note that both front and rear camera can shoot videos up to 4K.There is no mention of Dual camera setup as many of the Benchmarking sites cannot identify what kind of camera is using.As per leakster Roland Quandt the Google Pixel XL 2 will come with NFC, Gigabit Wifi dual band and also Bluetooth 5.0 support.

Earlier leaks also claim that there will be no 3.5 mm headphone jack this time and will feature dust and water resistant rating.As per previous leaks it should also come with dual camera setup.

We have to wait until October of this year for Google to announce its flagship smartphones.