Facebook
Twitter
Pinterest
WhatsApp
Microsoft popular web browser Microsoft Edge which made a debut on Windows 10 is popular among masses and now Microsoft is all set to launch the same on both Android and iOS soon. 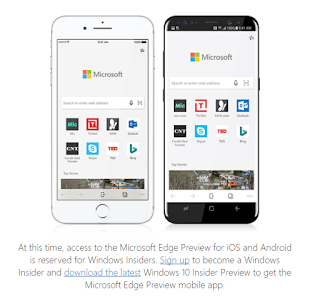 We all know that Microsoft Windows Phone is completely dead by now and Microsoft is trying hard to survive under Mobile division, now Microsoft has already launched a bunch of apps on Android and Apple App store and constantly developing new apps for Android OS.Now we have news that Microsoft is planning to launch its Edge browser to both Android and iOS devices to take on Google Chrome Browser.

Microsoft announced that the Edge Browser will soon land on both Android and iOS devices but didn’t mention when exactly the browser will be launched on Android Play Store and Apple App Store.But if you are excited to try the app then directly head to Microsoft website and sign up for Windows Insider Program or Windows 10 Insider Preview Program so that you will get a chance to use the beta version of the Edge Browser app before it releases the stable version.

The Microsoft Edge Browser can be downloaded to all Windows 10 users who have to signup for Windows 10 Insider Preview program and download the app.